Water Gets Sprayed Everywhere. Who's Paying for This?

I'm not an expert on demolition.  These were taken at about 7:30am, near the corner of Yale and Koehler street, 77007.  I left my street today to go to work, and saw this going on: 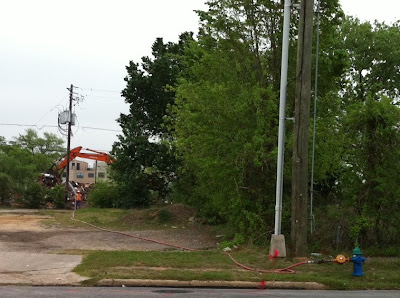 Thats a hose, coming from what looks to be a public fire hydrant, being used to spray down the demolition of the heights apartments.  The Heights apartments were bulldozed last week to make way for the development. 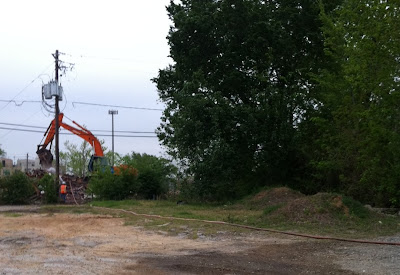 And a close up of the hose on the hydrant. 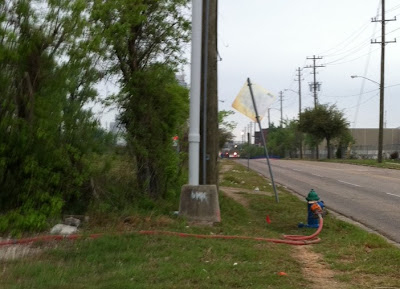 Then I drove down Yale a bit, and found one more to the south: 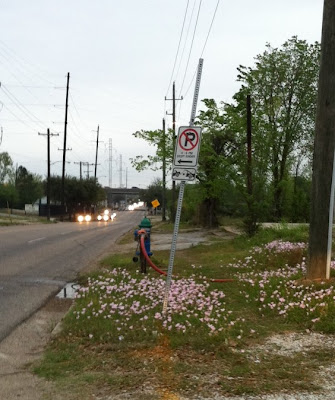 So like the title says, who pays for this?  Is the public funding the demolition now?
Posted by nicgk at 6:12 AM 4 comments:

So, a bunch of 'stuff' has happened (besides me neglecting my blog), and here's a rundown ...

-Swamplot named the Walmart 'Story of the Year' -  This is quite cool, because it means that for all the cage 'rattlin' we did this year, the story endured, and while the work has become less public meetings and media attention, it is still very much active.

-Prop 1 Passed - Another big political story.  This was one of the Mayor's 'big push' items, and it narrowly passed on the November ballot.

-Redistricting passed - Despite the Census saying we don't have 2.1 Million in the city, City Council voted that we did, then they voted to go ahead with Redistricting.

-Prop 1 Changed its name to Rebuild Houston, and details have begun to emerge - There's a bunch of stories out there on this, and you can read about it just about everywhere.  I went to one of these meetings the other day, and asked a couple of questions:

-How much does this cost?
-When do we see benefits to the public?

The Mayor Answered that it will cost 'about a couple of million per year', and that through 2018, everyone has to suffer a bit.  The long and short of this is, its going to be an extra fee, the funds collected will go to pay off city debt for the next 7 years, and hopefully the CIP budget will increase by 2018.  So there is no immediate benefit, and we just have to pay more money.

Obviously there are a bunch of people upset about this out there.  Some have filed a lawsuit.  Its hard to sell an extra fee for living in the city when the city's out of money, so package it how you will, the upside to this is nearly a decade away per the Mayor's graphs.

-Mayor Parker is walking some tight ropes in budget discussions - Long story short, everything's gotta be cut, and its not gonna make everyone happy.

Its an election year, and that means that everyone's out to keep their jobs in local government (or get elected to new ones).  So, everything between now and November will be extra criticized and watched.

How does that relate to us and the development ...

Right now, the development has moved very little.  While there may be signs up advertising that there is plenty of retail space available, no dirt has been moved yet.  The city is working on reviewing the TIA, or Traffic impact analysis.  A TIA basically looks at traffic scenarios around a development, and gives folks more information on how building it will affect the community.  A TIA is required by the city, and must be approved, as it sets the plan for how the development will be implemented, and what changes need to be made before it is built.

The first TIA has been submitted, and rejected.  The re-work has been submitted as well.  Civic Clubs have started voicing their concerns.   West End Civic Club sent a letter in as well, which is a pretty big deal.  Basically, all traffic concerns need to be addressed before anything can be approved.

So, RUDH has been presenting PIR's, and not getting much in return.  Its frustrating that we have to ask over and over for public information, and that the city seemingly does not provide all the information we ask for.  But, its been a frustrating process from the getgo, so this shouldn't be too much of a surprise.

There are some big concerns with Traffic and Infrastructure impacts right now, and I'll make a post specifically about that.  But the intent of this post is really to show that there has been a lot going on in Houston with all the players ... City Council Members are constantly reminded, amidst being told of budget cuts and layoffs, of the millions they voted to support the development with.

Whats wrong with this picture?
Posted by nicgk at 4:23 PM No comments: