My Understanding of What They Are Talking About ...

Have been reading up on some of the community forums, especially HAIF (really popular thread!), and I'll give you my thoughts on this to sum it up ...

Ainbinder has negotiated seriously for many months with multiple tenants to bring a development project to the site that would satisfy a couple of goals:
-Develop The Land in a 'cool' urban way
-Pay for the immediate infrastructure needs surrounding it
-Make Money, because they've owned it (the land) for a long time, and in a depressed market, now is the time to invest for maximization of future growth potential.


-On Developing the land in a cool, urban way that people will like - This is a given.  Any development that comes there will have to be done as such, because its what the inner loop demands.  There is a need for style, greenery, and substance these days, and the uproar over the possibility of a dolled up strip mall coming in is proof of that demand.  Thus, this is kind of a moot point; suffice to say, it will look nice, because if it doesn't, the developer knows it will fail, and they will lose cajillions on it over time.

-On Paying for the immediate infrastructure needs surrounding it - This is the most crucial point of the discussion.  The Developer needs to find the right mix of Tax help from the city, and tenant that can pay for it, so it narrows down the pool to a select few companies willing to pony up the cash to help them get this done.  The Developer can get the infrastructure taken care of to support it, including the drainage channeling, runoff, and street access, and they can do so in a shorter timeframe than the city could do it, but what is their motivation to do so?  Making money, and Tax help.

So what needs to be done, and what the developer is kind of showing on this diagram here ... 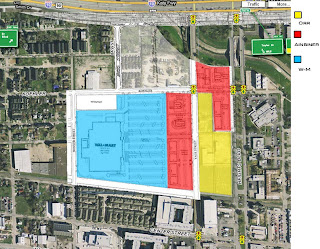 ... is to say "Look, we (the Developer) can take care of this area for you at our (Developer's) expense even though the city should be doing the streets, lights, sidewalks, etc, but the tax help has to be there in order for us to do it."
So, the focus essentially becomes limited to what you see ... Yale, RR Tracks, part of Bonner, Koehler in front of the development, and the bridges sort of on the northeast corners of the development, the apartments on heights, and the proposed thoroughfare of Koehler from Yale to Heights.
Thats fair enough, and sounds fine.  If privatization of some infrastructure points helps grow my neighborhood, then awesome ... I'm all for improvements.  The problem comes when that privatization does two things:
-Works to Save costs on the plan + maximize profit through whatever means possible, and ...
-Does 'just enough' to get by.
This translates to improving the immediate streets bordering, without paying any mind to the area streets that WILL inevitably be effected, and cutting corners in the implementation, which WILL happen, that leaves the community with something less than what is promised ... and again, it WILL inevitably happen.
NOW, we add Walmart to the discussion.  The developer selects a retail partner out of two (HEB & Walmart) that is a historically controversial company, and that does not fit with the identity of the surrounding neighborhoods (Read: Heights).  The public gets wind that HEB wanted the land.  So we have a public who is aware of what they are intending to do (Walmart), and what could have been (HEB), and thus, we have a volatile mix.
-On Making Money - So, the negotiation then becomes a three way volatile mix, with the city deciding how to utilize taxpayer dollars to credit a developer who can help the city, but at the expense of introducing a retailer that the taxpayers don't want, but they feel can be forced down the community's throats enough for us to eventually accept it, all in the name of the Developer maximizing their profit.   And THATS what their needs to be transparency about.  The developer has a right to make money ... but that money needs to be in a form that the taxpayers will be happy with, because you are asking of the taxpayers, by way of the city, for assistance in your business to make that money.  It happens every day, in other parts of this town, and in other cities across our great nation, and it is called compromise.
HEB may not be able to, or may not have been willing to pay as much as Walmart to get these improvements done, but the question remains if we really need to dance with the devil as a community in order to get the improvements sooner rather than later?
I say no ... get it done with the right partner, and if it takes more time, then take the time to do it correctly.  Our society and economy is based upon instant gratification at the cheapest possible cost, and that is purely a recipe for long term disaster.  The development will happen.  I haven't heard of one person yet that says they don't want development to happen.  The only objections I hear are those that don't want a controversial retailer (Walmart), with a horrible labor and insurance track record, to come in, increase crime, lower my property values, devastate the real estate revenue pool in the area, cannibalize and pay less for local jobs in the area, and generally screw things up for the community.  While the numbers exist to support all of these ideals, just the very public perception of the negativity will hurt everything; politicians should understand that more than anyone out there.
They argue that they are taking care of it, that they will come to the community, blah blah blah ... but the reality is, if Walmart makes an investment now, it will be far more difficult to stop it in the future.  And for all I know, the purchase agreement is already signed, and this may already be a taller mountain to climb.  But you know what?  I'm willing to get that done, and I bet there are 82 Gazillion out there that would say the exact same thing.
A Compromise, in this situation, does not include a Walmart.
Posted by nicgk at 10:45 AM