When I left my house yesterday morning, it was roughly 8:30am.
When I returned at about noon - 12:30ish, I found these signs around the property: 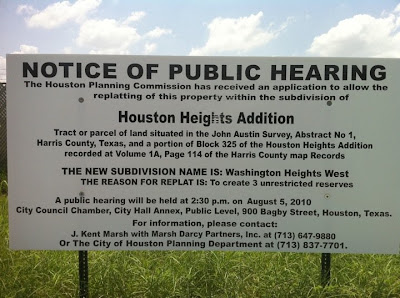 In Addition, I saw another sign at the T-Intersection of Koehler Street and Yale, just south of DirtBar: 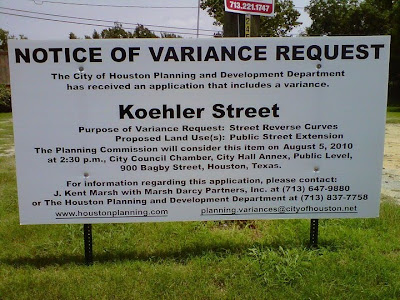 At the time, I did not take a picture of the difference, but a 'Stop The Heights Walmart' FB  Admin posted a pic shortly thereafter.  The signs were/are located roughly here.  Green = Houston Heights Addition Sign, while Blue = Koehler Street Variance Sign. 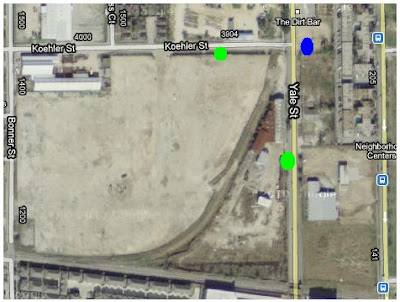 I posted the Houston Heights Addition Sign on FB, and the Koehler Street Sign was posted by another admin.  Here's the feedback we received:

RE - Koehler Street REVERSE Curve - REVERSE. A reverse curve consists of two simple curves joined together, but curving in opposite direction. For safety reasons, the use of this curve should be avoided when possible (view C, fig. 11-2).


The Koehler Street Variance Sign, as of this morning, has disappeared.

"This hearing is very likely the reason the leaked Ainbinder site plan was created. It shows the 3 unrestricted reserves along the Yale St. frontage as 1 pa...rking-in-front strip center + 2 drive-thru lease pads. Unrestricted reserves are tracts typically held out of new residential subdivisions for future commercial or alternate use. The hearing on the 5th will be before the Planning Commission. While it does offer another venue for public comment, speaking before the PC re: re plat applications is almost always an exercise in frustration. The hearing will be relative to the 3 reserves only....not the 15 acre Wal-Mart site. In the absence of a variance request, this will be a "shall approve" application for the Planning Commission. Meaning anything anyone has to say in opposition to the re plat or about Wal-Mart is not relevant to the PC's decision. If it's not already there, another sign like this should go up for the additional 3 unrestricted reserves on the other Ainbinder site between Yale and Heights Blvd....1 more parking-in-front strip center + 2 more drive-thru lease pads. "


Anybody have anything to add?