Recieved full details of the Variances and Replats request coming in ahead of the August 5, 2010 Meeting today.  Here's the site plan: 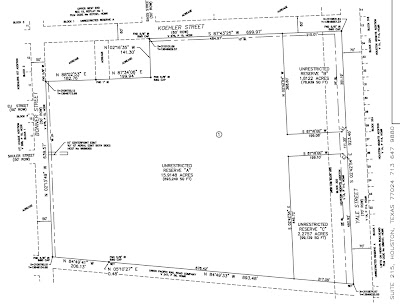 And Here's the Koehler Street Variance Overhead, showing the future connection of Yale and Heights via an S-curving Koehler street. 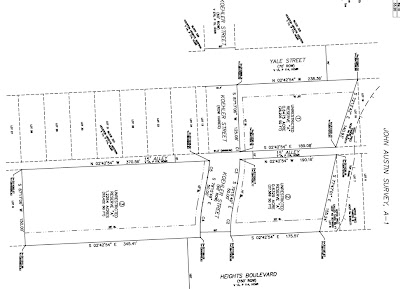 
Variance Request Information Form
Plat Name: Washington Heights Koehler STD
Company Name: Marsh Darcy Partners, Inc.
Date Submitted:
07/26/2010
47 and 81
Specific variance is being sought and extent of variance:
A variance is being requested as part of the Koehler Street replat to deviate from the required minimum reverse curve centerline radius of 300 feet and minimum centerline tangent of 100 feet. The variance requested is to provide a reverse curve centerline radius of 265 feet and a centerline tangent of 50 feet. Chapter 42 Reference: Section 42-132(b) – Reverse curves with a tangent distance of
100 feet or less along collector streets and local streets shall have a centerline radius of at
least 300 feet. Reverse curves shall be separated by a tangent distance of not less than 50
feet. Statement of Facts:
(1a) The imposition of the terms, rules, conditions, policies and standards of this chapter
would create an undue hardship by depriving the applicant of the reasonable use of the
land;
(1b) Strict application would make this project infeasible due to the existence of unusual
physical characteristics that affect the property in question, or would create an impractical
development or one otherwise contrary to sound public policy;
The Koehler Street replat is composed of portions of lots 11 – 14, Block 316, and a portion of Lot 1, Block 324, of the Houston Heights Addition. The Houston Heights record plat indicates 70 foot wide lots in this location for possible future roads within the plat. Existing Koehler Street west of Yale was not a part of the original Houston Heights Plat. As a result, there is an offset of approximately 20 feet between the centerline of Koehler Street and 2nd Street at Heights Boulevard; and to create a continuous through connection between these two streets with a total transition distance of 156 feet, requires the street to be constructed with two reverse curves measuring 265 feet with a tangent of 50 feet between. Chapter 42 will not allow the physical construction of the required reverse curve without a variance. Regarding Section 42-132(b), without this variance request, the street connection between Koehler Street and 2nd Street would not be able to be built. Several alignment alternatives were presented to the Public Works and Engineering Department for their review. The Department supports this proposed alternative. The intent of Chapter 42 will be preserved and the granting of this variance will not deviate from the intended purpose of Chapter 42 of the City of Houston Code of Ordinances, and will further the 2010 Major Thoroughfare and Freeway Plan by providing an additional through connection in this area. That was the intent of the original Houston Heights street pattern plan.
(2) The circumstances supporting the granting of the variance are not the result of a
hardship created or imposed by the applicant; The unique physical conditions at this location requiring this request were in place prior to the applicants gaining interest in the property. The existing 20 foot offset between the existing Koehler Street and 2nd Streets have been in place for decades. The offset of these two streets is a unique condition that was not created or imposed by the applicant and should be considered for the variance requested.
(3) The intent and general purposes of this chapter will be preserved and maintained;
The purpose of providing an option to the reverse curve and tangent requirements is to allow a continuous connection between Koehler Street and 2nd Street, allowing an opportunity to provide greater connectivity within the area. Due to the unique physical characteristics of this site, without the granting of this variance request, a continuous through connection between Koehler Street and 2nd Street will not be possible, resulting in a 20 foot offset of street intersections, and the granting of this variance will not hinder the general intent of Chapter 42, specifically Section 42-132(b).
(4) The granting of the variance will not be injurious to the public health, safety or welfare;
and The approval of this variance request will allow the construction of a through street connection between Yale Street and Heights Boulevard. This through street connection will allow for better internal flow of pedestrian and vehicular traffic, which could reduce congestion by providing alternative traffic routes within the immediate vicinity. The construction of this connection will also remove two (2) dead-end streets within the neighborhood. The approval of the requested variance to Section 42-132(b) will allow the street connection to be constructed, which as a result, which will directly contribute to the public welfare and in no way be injurious to the public health, safety or welfare.
(5) Economic hardship is not the sole justification of the variance.
There is no economic hardship on the subject property; the existing physical constraints of the 20 foot
offset between Koehler Street and 2nd Street dictate the need for the variance to construct the Koehler Street connection.

And to add the cherry to the whipped cream ... that 'Unresetricted Reserve A' in the middle there ... thats 694K Sq Ft of Walmart Goodness.
Posted by nicgk at 11:17 AM